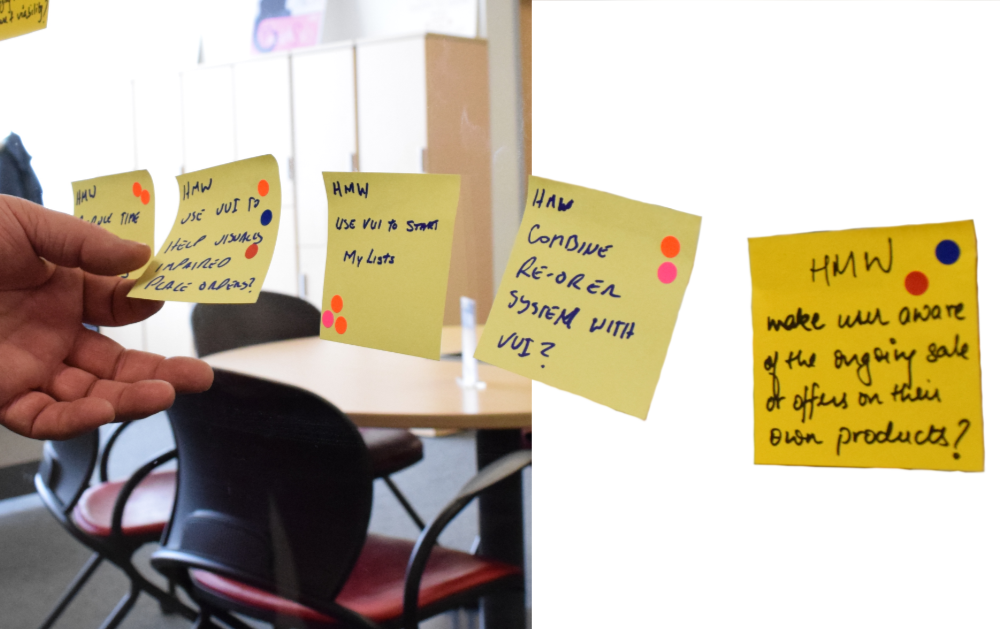 A week long sprint, using the methodology from Jake Knapp's book Sprint, that took us all the way from defining a problem to testing a prototype. My specific contributions were:

Tools used for this project:

This was an exciting project to work on for me. Not just because of what we were designing, but also because of the methodology we used. We followed the guidelines for a design sprint as outlined in Jake Knapp’s book Sprint, in an effort to develop a voice user interface for Grocery Gateway.

I was fortunate to have the role as sprint master for my team, meaning I guided my team along through the exercises, making sure we stayed on schedule, and was responsible for collecting all the artefacts. 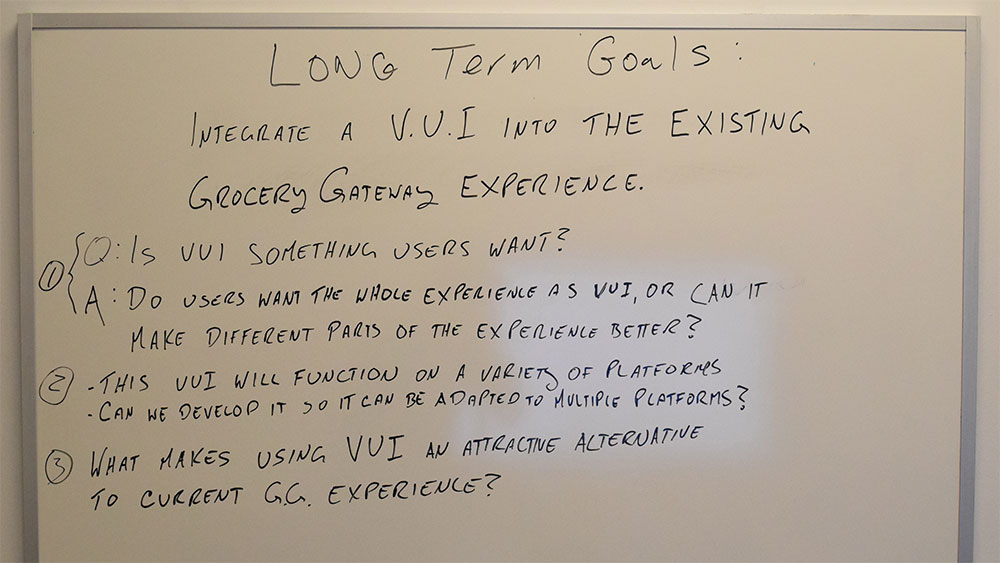 The first step of the sprint was to have a discussion as a team to set a long term goal and sprint questions. The team kept coming back to this during the design process to make sure we were on track.

Ultimately our long term goal was to integrate a VUI into the existing Grocery Gateway experience. For the questions we considered some issues we might encounter, and turned them around as questions we might also try to answer during the process:

After discussing our long term goals, we moved along to create a simple journey map. We started with different actors in the process, with an end goal of groceries being delivered to the customer. We considered existing and new customers, but also what was happening in the background at Grocery Gateway during the process.

It opened up a lot of possibilities for us in terms of what we could potentially design for. 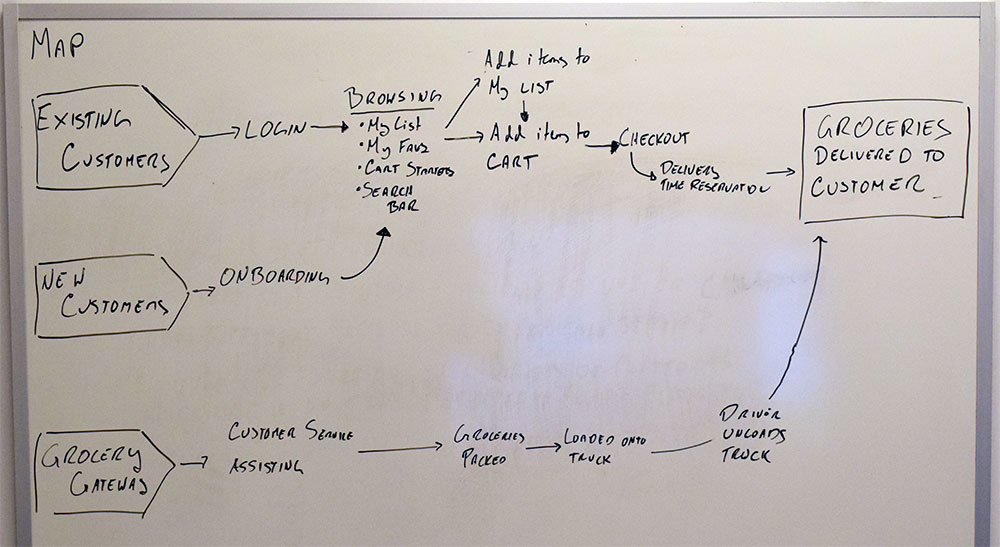 For the next step of the process, we needed to consider the information we had available to help us along in the design process. During a previous project, we had the opportunity to do 1:1 interviews with users of the website. We also had information that had been presented to us by our Grocery Gateway partners about their customers and their needs as an organization. As we were going over this information we How Might We notes—asking questions about problems we could address.

Every group member took their How Might We notes created during research and put them on a wall, affinity board style, where we grouped them into themes. 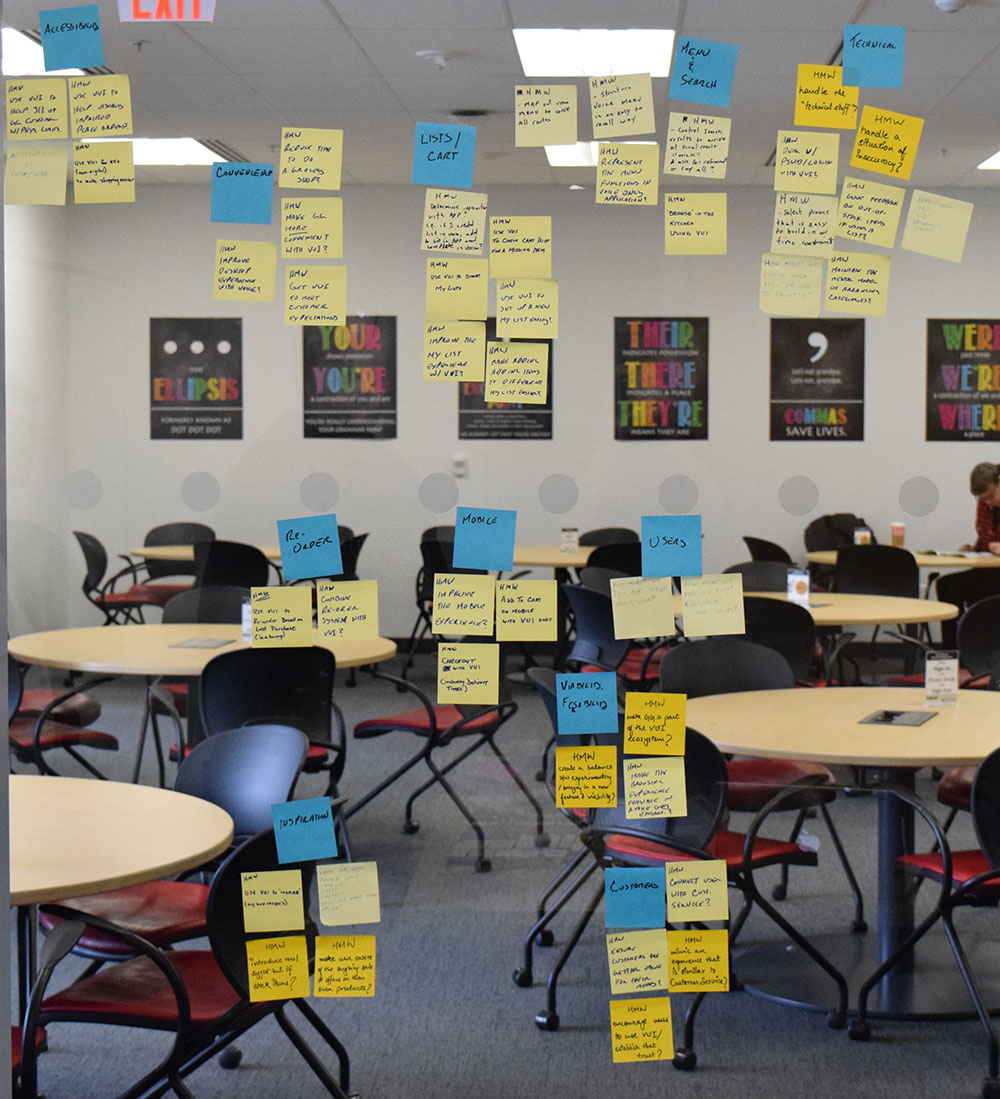 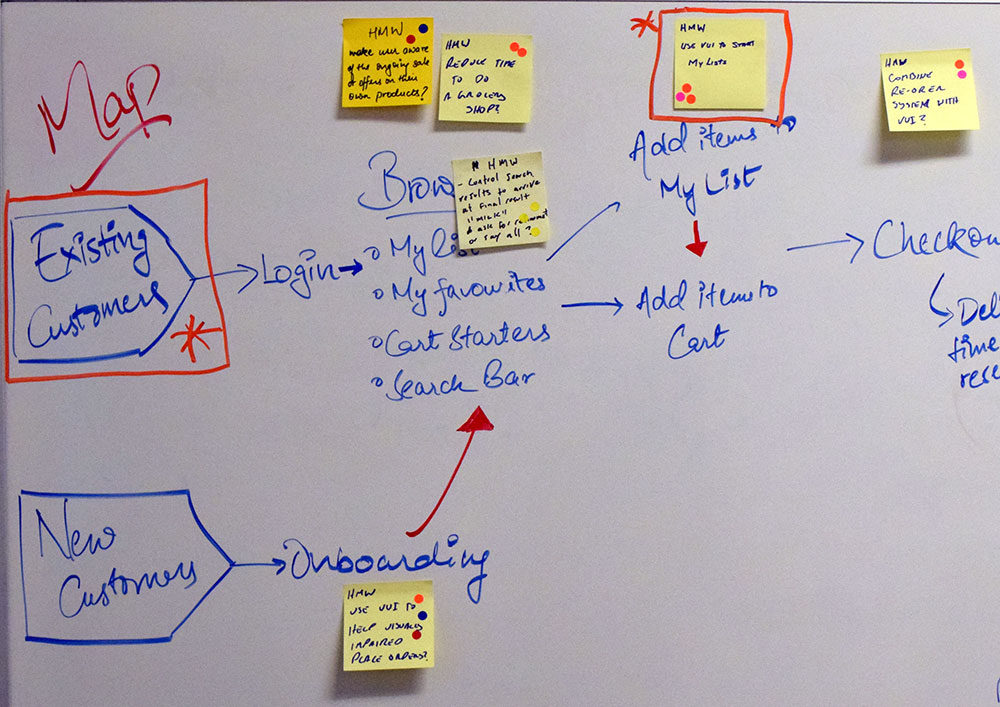 We identified what we thought we the five best ideas and put them on the journey map.

At this point we decided what we wanted to target in the remaining days of the design sprint—designing a VUI for the My List function on Grocery Gateway, with existing customers in mind.

The second day started off with an activity called lightning demos. Everyone in the group was required to prepare a short three minute presentation on another company or service that uses a VUI and present to the rest of the group. I explored how companies were using the Siri suggestions function in iOS, such as Great Clips. Other group members considered Domino’s Pizza, Alexa, Google Home, and Garmin.

As a group we took notes on the whiteboard highlighting ideas that might be useful in our design such as choices for the user being presented visually. 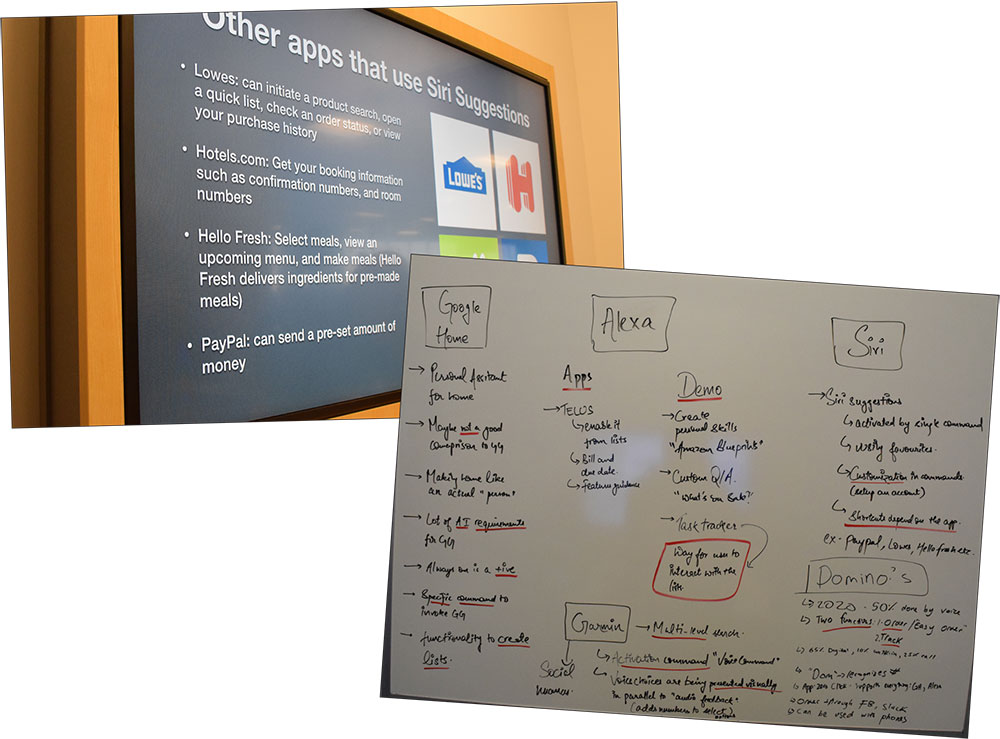 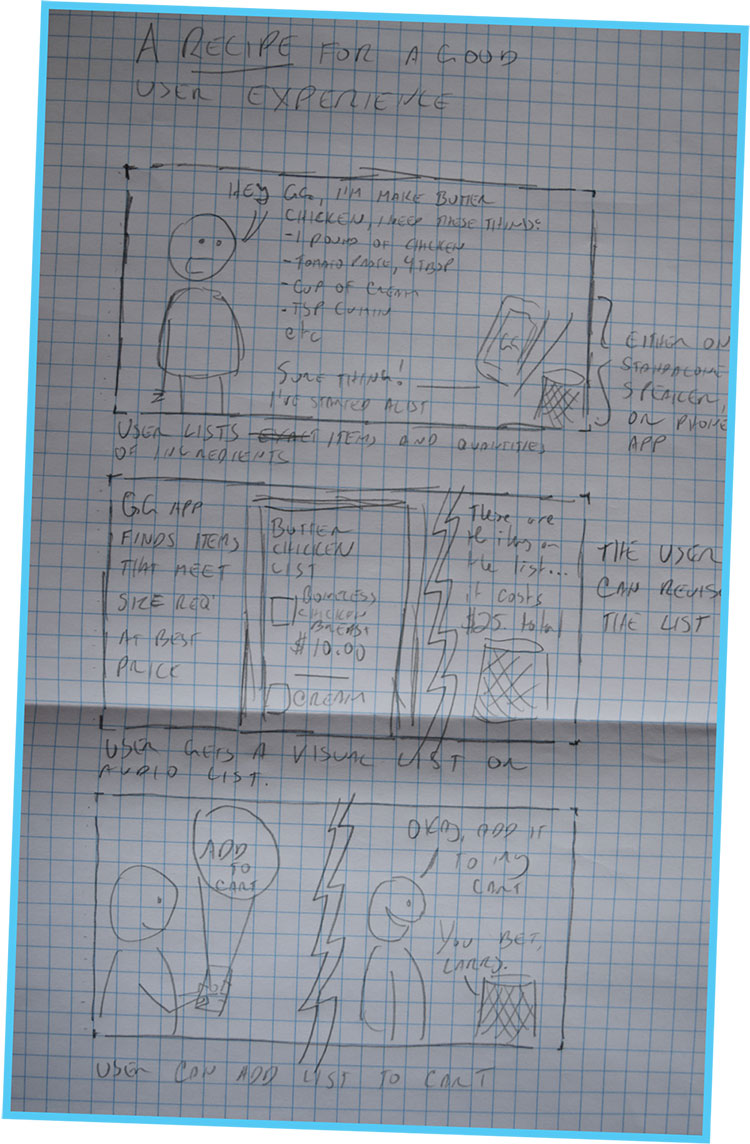 The next thing we moved onto as a group was the four-step sketch. This consists of:

My last sketch was a scenario where a user could dictate to the app recipe ingredients and measurements and then a list (specifically using Grocery Gateway's My List function) would be created for the user with the best matches for the user's needs. I believe this would speed up the process of creating a list, making it significantly easier than searching for each item individually. 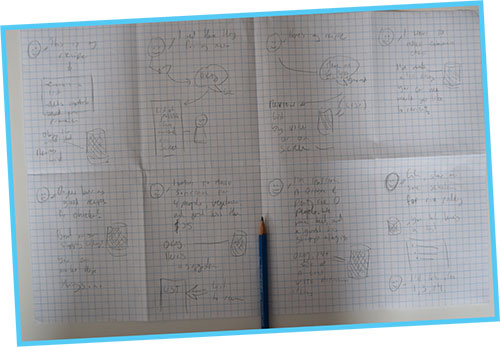 On the third day we had to make some decisions about what we wanted to prototype. As a team we:

For our prototype we decided to use several ideas:

We felt this prototype would satisfy our long term goals established on day 1. Namely it would integrate with the existing Grocery Gateway ordering system, it would speed up the process of list creation making it an attractive use of a VUI, it was making a specific part of the experience better, and while we envisioned this prototype using a visual interface, we could see parts of this being adapted to voice only platforms. 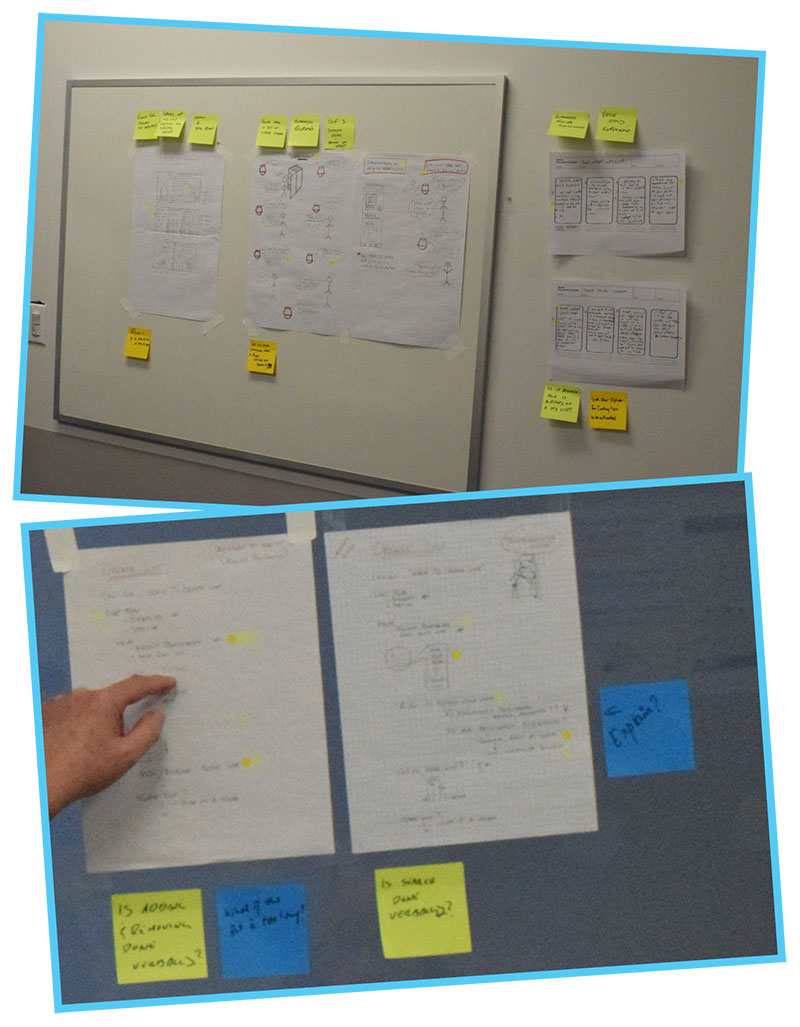 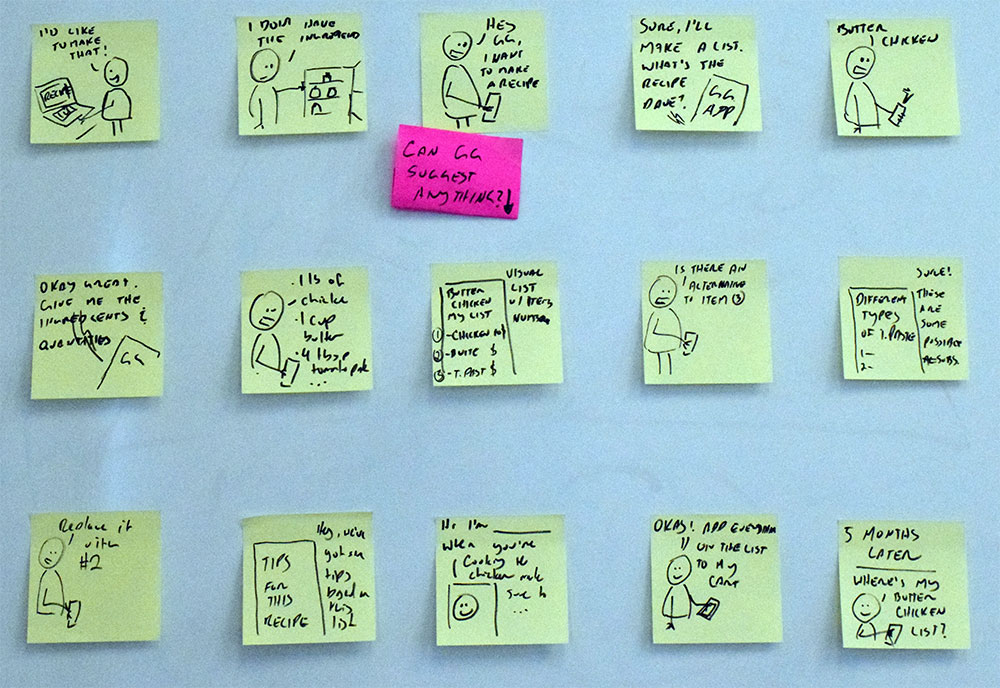 As a group we collaborated on a storyboard that walked through how our prototype would work. We limited it to 15 panels. I drew each one on a sticky note. The board walks through the user first deciding they want to make a recipe, to wanting to make it in the future after they've gone through the process of creating a list with the ingredients.

At this point we had to make decisions as a group how we were going to prototype. We divided up portions of the work. I was responsible for developing the first portion, both an audio script for the VUI portion and what was happening on the screen. I used Sketch to develop the on-screen part, and put a visual script together in InDesign.

Later in the day we nominated one person to take all the screens the group had developed to stitch them together in a single document we could show to testers. I took everyone's audio scripts and put them into a single cohesive document that would then be used with the screens.

At the end of the day we had a prototype that would allow a user to go through our storyboard scenario. They could give verbal commands and would get verbal feedback from the "system", and see what a user would be seeing on a mobile device as they used the VUI. 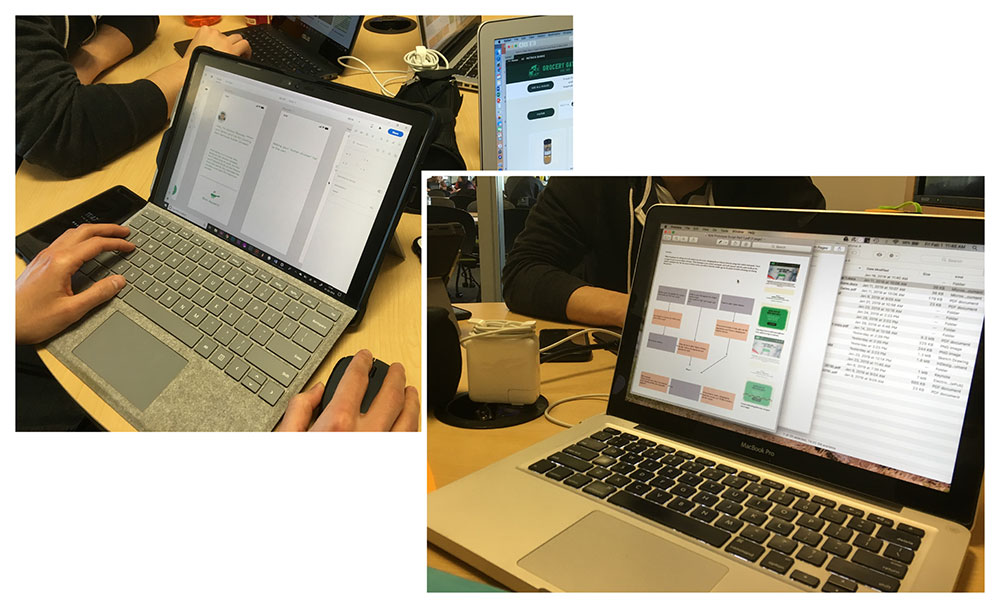 On the previous day, one team member developed a test plan to be used in conjunction with the prototype. During the week we secured five persons with which we would be able to test the prototype. We asked pre- and post-test questions to get user feedback on the prototype. We used Quicktime to make on-screen recordings with the audio for later review. 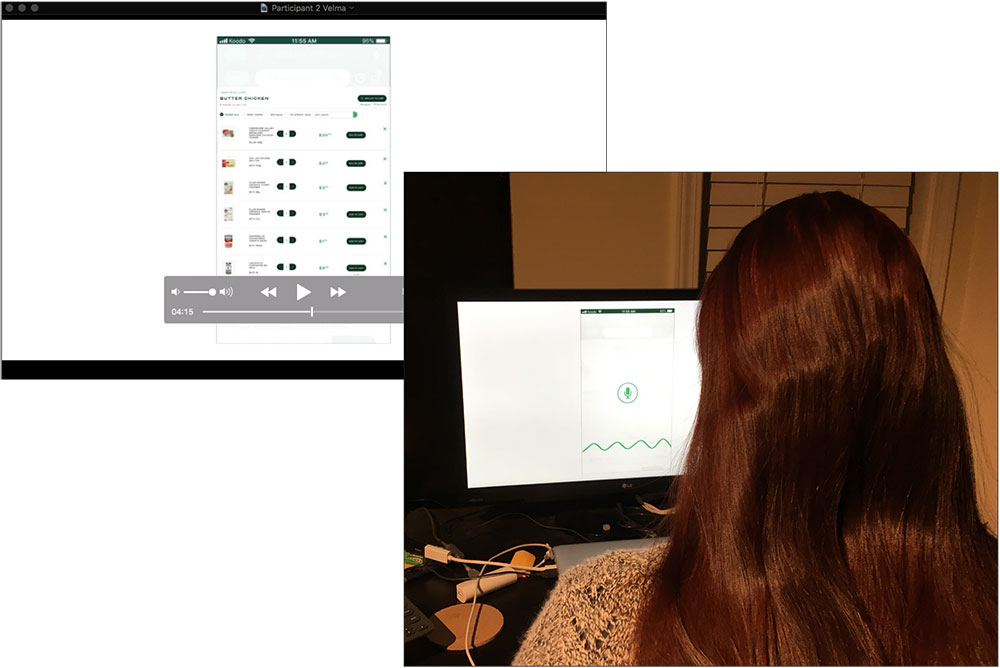 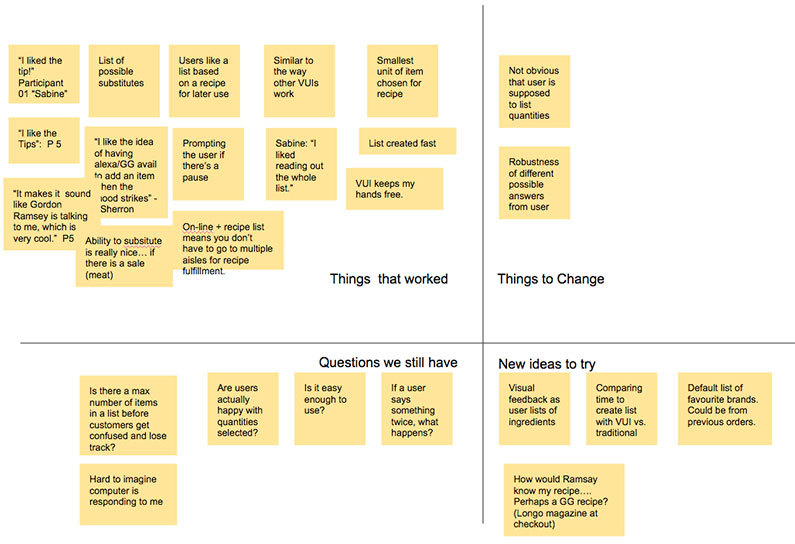 We took the data from the test sessions and created a feedback grid. From there we developed some insights and next steps:

This sprint represents the first part of a capstone project. The second part will go deeper into prototyping with more testing. I'm looking forward to taking what I learned from this portion of the project and building on it.

In terms of the sprint methodology, I found it an effective and enjoyable way to conduct design. As the sprint master, I made sure the team observed the time limits for each activity. This served two purposes. First, it kept us on track, we completed the project in the allotted amount of time—it kept us from being paralyzed by debate at certain points of the process. Secondly though, the time constraints encouraged creativity. For instance, the crazy-8 sketch activity forced me to come up with variations on my original idea that I wouldn't have thought of if I wasn't under the same duress.

Following this sprint, I was able to work on making an interactive prototype using Invocable (I think it's now called Voiceflow), application used for building Alexa skills. The video here shows the flow of the voice interaction when used by an actual user.